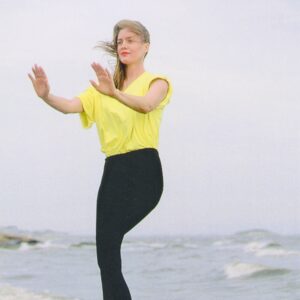 “A form of exercise that can help to prevent and even support in treating disease,” read the description of the qigong class. I had never heard of this movement art before, which is similar to tai chi.

“Really?” I asked myself skeptical but curious when I signed up to learn Soaring Crane Qigong. I attended twice a week for two months with a group of young professionals, some of whom became life-long friends.  Three of us continued our practice with our teachers from China and that summer attended a 10-day workshop with the creator of the form, Zhao Jin Xiang.

When the chronic wheezing in my lungs resolved after seven months of practice, I was more than intrigued. I went on to study the theories of Chinese Medicine upon which qigong is based, and I am currently a licensed acupuncturist in New York, Connecticut, and Virginia. I went on to teach qigong in the acupuncture school I attended, at The New York Open Center, and teach many groups and individuals.

Three years after that first class, I invited Zhao Jin Xiang to stay with my family for two months. During that time, we taught classes together and I learned more about this healing art. I also produced a film of him demonstrating qigong techniques so others could benefit.

Five of us worked as a team to videotape Zhao doing the five routines in the red rocks of Arizona, the tundra of Alaska, by the sea and near the peaceful salt marsh sanctuary near our home. The film is nowhere near what the quality would be had we filmed it today with 4K resolution. It is grainy, however, it clearly shows him demonstrating the subtle movements of the form —  with narration and without.  Zhao has since passed and I am grateful to share his legacy of healing.

I encourage you to check out the trailer explaining how this exercise works here.

While it is always easiest to learn with a teacher, an instructional video is second best, especially in these times in which learning online has become second nature for many of us. It is available for three month access for those who would like to learn it.