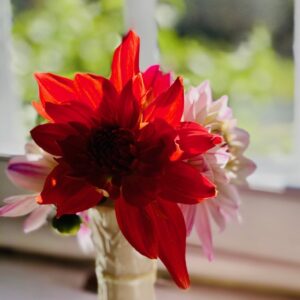 Feng Shui means the art of placement. In acupuncture work I begin with my surroundings, but this ancient art moves deep into my practice as well. There should be balance and elegance in a treatment strategy whether it is for reducing anxiety or addressing a digestive disorder.

The young man whom I treated yesterday had, as he explained it, “a lot of changes and transitions in his job”. It appeared that the stress, along with using heavy equipment he was not used to, contributed to a knot so tight in his upper back, shoulders and neck that he could not turn his head. After our discussion, checking his tongue and pulse, and palpating areas of tension, my treatment plan became clear:

The “feng shui” of my treatment, which took 45 minutes, was this:
1. Begin by ‘waking up’ and redirecting the circulation of blood and qi with tuina (Chinese massage). I began with his feet. “The further the farther” is a saying in Chinese medicine. The feet have energy pathways moving through them that lead directly to that ball of tension that manifested as the “crick” in his neck.

2. Continue to promote relaxation by stimulating the parasympathetic nervous system by placing a specific combination of needles that work to bring the body/mind out of the fight or flight mode and into a rest and digest state.

3. Address underlying issues with a specific play of needles. In his case some “liver qi stagnation” was treated with certain acupoints including what are called “the four gates”. In Chinese medicine: these are four acupoints: one in each hand in the web between the thumb and forefinger and one in each foot in the area below the first and second toes.

4. After removing the needles from the front of his body he turned over so I could treat the back. I placed 3 needles on each lower leg in specific locations (a Japanese technique) to treat the lower, mid and upper back.

5. After placing a few needles in some “back shu” points to “tonify” vital organs, I got straight to work on the culprits with some gentle trigger point therapy to release the trapezius, levator scapula, scalene and other muscles involved in the stiffness and sharp pain.

6. After removing all the needles, I rubbed arnica gel on his shoulders, neck and back before doing some “gua sha” to release any built-up toxins.

“I feel so much better,” he said and moved his head from side to side with a smile when the treatment was over.

No matter where I work, whether in the small corner office at a community health center or in private practice, I try to make my surroundings feel fresh. An opened window, a small sprig of flowers, a piece of art, or some splash of color all lend to a sense of beauty that leads to a feeling of ease. This is good for the spirit and a lifted spirit helps to heal.